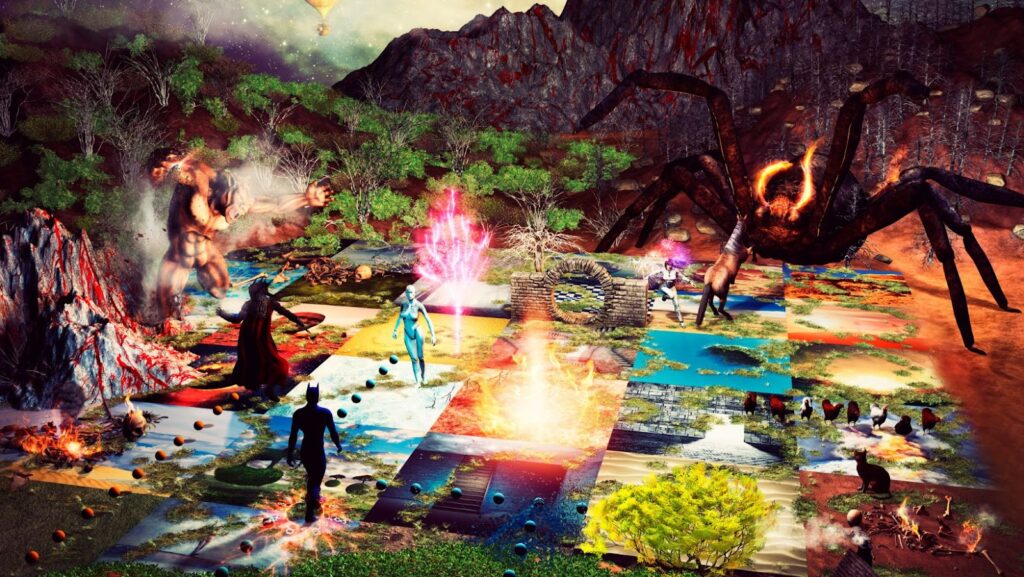 Knock on the Coffin Lid

The king, who was to reconcile the warring peoples of elves and dwarves, was killed on the road, along with his bodyguards. However, an unknown sorcerer resurrects the latter to save the kingdom from the troubles after the sovereign’s death. These are the heroes you have to play: they are caught in a time loop and with each death, they will resurrect again until they reach their goal.

One more game about a fantasy world on the brink of crisis, indie studio RedBoon. Knock on the Coffin Lid is a stylish card game where you have to traverse again and again a long journey through a magical kingdom inspired by northern landscapes, dark fantasy, and epic novels in the spirit of Conan stories. The game has very deep gameplay: there is a deck of ability cards, skill combinations, and many classes. You can play as an ordinary mercenary with a sword and shield or as a werewolf elf who changes his appearance right in the middle of the battle.

The game’s action takes place in an alternative Middle Ages filled with magic and dangerous monsters. Knock on the Coffin Lid has many decks and heroes can be equipped with items with different abilities. Here the gamer often has to make a choice, which forms the path of his character, who has to take part in 50 different events.

You can restore health parameters and pump cards by coming to a campfire near the camp. As he progresses, the character also collects a variety of loot, including weapons and armor, which have separate properties. The player is looking for unnecessary items in locations, purchase from merchants for the earned gold, and take away from the corpses. Learn new details of a fascinating story in which by the will of fate were drawn into the characters of the game.

The development of the story in the game is constructed so that each new game becomes more interesting than the previous one. Each character in the game surprises you with unconventional gameplay mechanics, forcing you to deviate from the usual templates and search for the optimum game strategy.

Each time you open the coffin lid, you are immersed in new details of the story, game events, and new solutions. With each game, you discover, bit by bit, the storyline of the great game, conceived by the demigods in the world of Midian. The end of the story depends only on you!

The game is set in a land called Cvstodia, which is all stylization of classical Latin, and there will be many phrases in this dead language in the game. Cvstodia is a world of torment and pain. It’s impossible to find someone happy and serene there because the people who live there suffer for their sins of his. Years ago, a miracle punished him: he was burned and the ashes left behind filled the cathedral where he and his servants dwelt. Years later, the souls buried in the ashes, including Escribar himself, escaped, becoming even more insane and bloodthirsty than they were before they died.

As for the more positive characters, one of them is our protagonist, the Penitent, a nameless servant of the Brotherhood of Silent Sorrow who has taken a vow of silence. He is the only survivor of the massacre that destroyed his comrades-in-arms, and the only one who can save the world from suffering.

When you open the Black Book you irrevocably fall into the world of old Slavic rituals, folk customs, and immemorial beliefs. The folklore basis of the project stuns with its depth and authenticity, but most of all – an unusually harmonious consonance with the excellent gameplay.

The main character of the game – is Vasilisa, a young girl who mourns the tragic death of her lover. And to resurrect her beloved man, she will try to learn all the secrets of the Black Book and become a real witch.

The action of the game takes place in Cherdynsky district of the Perm province of the Russian Empire in 1879 and heavily relies on Russian folklore and Komi-Permyak mythology. To make sure that the myths and real places are authentic, the developers worked together with Russian ethnographers.

There you can see vivid flavor of the Russian North and Old Slavic legends. Excellently written and quite down-to-earth story of a Russian girl. In-depth, albeit sometimes complex and not quite balanced gameplay, great atmosphere, and soundtrack and, most importantly, honest role-playing wagering.

Good games based on Lovecraft’s work do exist. The developers have learned how to convey the atmosphere of the horror master’s books. They decided to make a dystopian roguelike that generates not only levels but also various monsters.

Each trip to the Claylands begins on behalf of a new character. These hooded men know how to use the magic of arcane knowledge. Taking a magic weapon in each hand, they battle with monsters. Their equipment is simple: amulets, hoods, and combat artifacts. No machine guns or bombs help against the ancient evil. And once the fight against the monsters begins, the game exposes its flaws…

It is a dynamic and atmospheric side-scrolling with roguelike elements and deep gameplay: magic at close range, exploration of mazes, collecting loot, and skill tree with abilities, classes, and spells. The protagonist will have to solve the cosmic mysteries of the Tower of Madness.

A distinctive feature of the project is the monsters inspired by the works of Lovecraft. Each is unique and is created with the help of procedural generation, machine learning, and neural network.

A unique strategy card game in which you feel like a combat mage and face off against a host of worthy opponents. The gameplay is a classic collectible card game. There are several modes of defeat.

First, it’s almost mandatory to play Duel. A single victory in this battle will allow further participation in the League mode. What’s good about Duel is that you can defeat both random cards and a specific deck here. It is a good way to learn the game.

Master the powers of the elements, and you will have the most powerful magic in the universe at your disposal. Exorcise your enemy with a shower of deadly spells and send out an army of summoned creatures! You gain the right to be called the true Lord of the Astral when you defeat all your opponents.

Astral master is a strategic card game with unique and exciting gameplay.

Four magical elements, many spells, and various opponents – a huge scope for constructing your battle tactics.